Crafty Draftn: Ollie Wines (pick 118) averaged 97 over the regular season, Harvey and Hogan were both picked in the last 3 rounds and averaged over 82 and within the top 31 for forwards.
Draft Dud: Most would've expected Gaff(pick 18) to continue to improve on his 102 from last year, however he returned to 2014 numbers dropping back to 92. He was averaging 99 before his head got anus'd at the neck by some power flog.
Prized Waiver: Rich was waivered in round 4 and scored a healthy 84 as a defender. Grundy was picked up during the byes and averaged 108 for the remaining 5 weeks. Coondog averaged 95 while in the Brown and blue, Boak 116 for 4 weeks.
One That Got Away: Dropped for byes, Nathan Jones collected 426 in the final month. Paddy Cripps averaged 97 after being dropped in round 3. Sam Gray, 88 as a fwd.
Lame Grant: Pick 3 in the draft, Fyfe scored over 120 in 3 games but succumbed to injury only playing 5 in total, TayTay Adams missed 7 games, Bennell was his 4th pick and didn't play a single game.

A Draft focus on youth, with a drafted average age of 24, drops to 23 if you omit Harvey. After Boomer (37), Joe's next oldest was Cal Sinclair at 26 and Christensen at 24 and 9 months. Nine of his drafted 15 lowered their average from the previous season, as a result he only kept 5 players for the duration of the season. 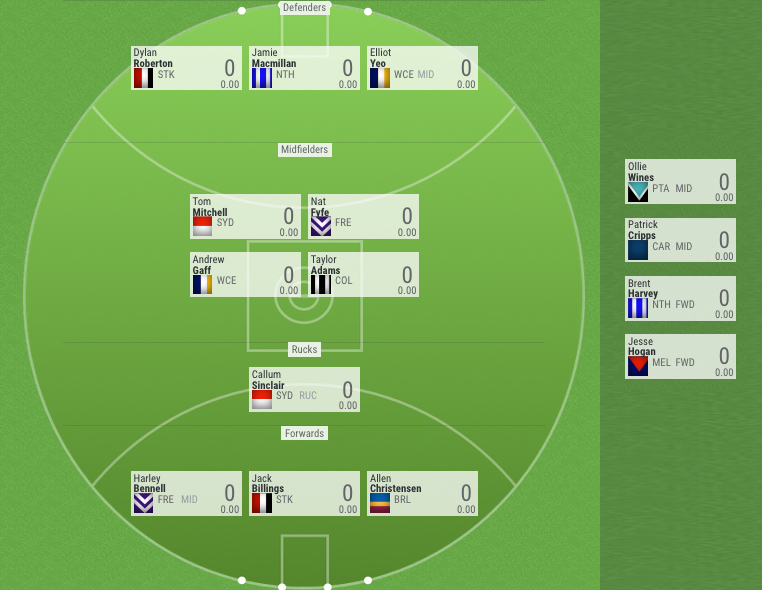